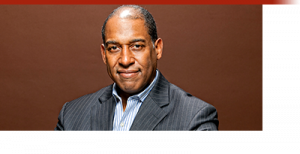 Jim talks with Greg Thomas about American democracy & the problems created by racial essentialism & racialization. They discuss the Jazz Leadership Project, jazz as metaphor, the connection between racism & the concept of race, the slave trade’s role in producing racial essentialism, Bacon’s Rebellion & subsequent divide-and-conquer legislation, justifications for exploitation, the horrors of chattel slavery, a mutual love of Stanley Crouch & Fifties jazz, transcending race & including culture, Albert Murray’s “omni-American identity,” 3 foundational American archetypes, the developmental challenge of overcoming tribalism, legacy media’s structural bias toward conflict, why Ibram X. Kendi & Robin DiAngelo’s anti-racist books reify race, the blues as tragicomic & affirmative, varieties of racism, the impact of not thinking & acting in racial terms, appropriation as the way culture works, searching for something better than the past, and much more.
Greg Thomas is CEO of the Jazz Leadership Project. He curates and facilitates business workshops and humanities programs for a range of organizations, including JPMorgan Chase, Verizon, NYPD, TD Bank, Jazz at Lincoln Center, and Google. He’s written on jazz and democratic life for Areo, New Republic, The Root, New York Daily News, The Developmentalist, and his blog, Tune In To Leadership. Greg is a Senior Fellow of the Institute for Cultural Evolution and an Advisor to The Consilience Project. As an educator, he has presented on virtual platforms such as Rebel Wisdom and The Stoa, and served as a lead instructor for courses on Cultural Intelligence and “Stepping Up: Wrestling with America’s Past, Reimagining Its Future, Healing Together.” He’s also a co-producer of the annual “Shaping an Omni-American Future” event. Greg has lectured at institutions such as Columbia, Hamilton, Ben Gurion University, and Harvard.