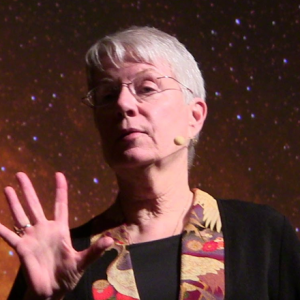 Jill Tarter received her Bachelor of Engineering Physics Degree with Distinction from Cornell University and her Master’s Degree and a Ph.D. in Astronomy from the University of California, Berkeley. She served as Project Scientist for NASA’s SETI program, the High Resolution Microwave Survey, and has conducted numerous observational programs at radio observatories worldwide.

Since the termination of funding for NASA’s SETI program in 1993, she has served in a leadership role to secure private funding to continue the exploratory science. Currently, she serves on the management board for the Allen Telescope Array, an innovative array of 350 (when fully realized) 6-m antennas at the Hat Creek Radio Observatory, it will simultaneously survey the radio universe for known and unexpected sources of astrophysical emissions, and speed up the search for radio emissions from other distant technologies by orders of magnitude.

Jill is a frequent speaker for science teacher meetings and at museums and science centers, bringing her commitment to science and education to both teachers and the public. Many people are now familiar with her work as portrayed by Jodie Foster in the movie Contact.